§ A Winters Day at the Beach with the Fuji X-E1 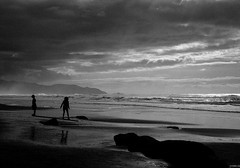 The wife and I decided to take the mutts for a walk on the beach this past weekend. We expected cold and dreary weather but were pleasantly greeted by partly cloudy skies and quite warm temperatures when the sun was out. All in all a good day to play with the new Fuji X-E1. In case you’re about to bolt, weary of more shots of my dogs, please venture forth, they’re not the feature of this post 😉 Fair warning, though, I had every intention of going out and shooting for black and white images, so there’s very little color in these photos. 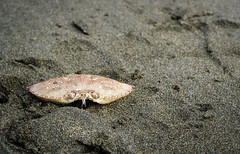 I must say that I’m still getting used to this camera. How to hold it, shoot with it, and how best to use its autofocus. The HUGE difference of using a digital viewfinder as opposed to a traditional optical viewfinder. Having a viewfinder that adjusts to the shooting conditions almost feels like cheating.

The overall ergonomics of the camera are quite good but being a person who has big old monkey hands it can get a bit weird to hold sometimes. I’m waiting eagerly for the nice folks at Match Technical to wrap up production on a version of the Thumbs Up for the X-E1. (They’ve communicated that they should be available soon). After that I may entertain the thought of the grip accessory for the X-E1, though I’d prefer not to as the compact size of the X-E1 was one of the key factors in my decision to purchase it. 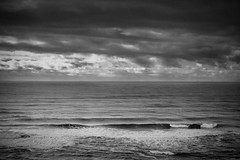 I really won’t be able to tell you here what you can’t read elsewhere, so I’m not gonna bore you with my version of a review. To tell the truth I was drawn to this camera for its sensor, its size, the lenses, and, yes, its design. So I’m in it more for the feel than the tech-specs. I’ve got tech-specs and plenty of fiddly-dials in my Canon setup. Though, really, the tech specs are quite good.

And the lenses are great. I bought the kit with the 18-55 f/2.8-4 zoom and also picked up the 35mm f/1.4. I have to say both are quite good. The zoom is quite surprising in its quality. I’ve been taught through years of kit purchases that the kit lens, 99% of the time, sucks. The 18-55 is part of the 1%. With fast focus, nice sharpness and pleasing out of focus areas (I refuse to type the “B” word) I’m quite smitten with it. The 35mm f/1.4 is fantastic. Though autofocus is a bit slow and noisy, and the lens hood is bothersome, the sharpness and quality of the images more than makes up for it.

With my Canon setups I’ve always wanted for more lenses. A lens for this, a lens for that. But I don’t feel that with this camera. That feeling is probably heavily weighted by the fact that I have many use cases covered with my Canon setup, but I still can’t help but feel different with the X-E1. Like it serves a different purpose. Like its more focused on engaging my brain on the act of photography and less on the obsession with technical perfection (not that I ever achieved that, really). I smile every time I get to change aperture via the aperture ring on the lens instead of via a dial. Maybe that also signifies that I’d have been more content with a Nikon kit as my main setup all these years? Maybe. (Its petty, but I really dislike the way Nikons look and feel) 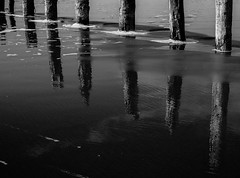 My only regret is I wish Apple would get it in gear and release support for the X-Trans sensor already. They’ve had plenty of time to work on it as the X-Pro1 has been on the market for some time. Add to that the X-Pro1 and the X-E1 share a lot of internals, including the sensor, and I wonder if they’re not doing it or stuck. The sensor seems to be a rather unique challenge for raw processors. The in-camera raw processing is, at this time, the best converter available. I’ve been converting all the images in camera and then tweaking a bit in Aperture or Lightroom.

There isn’t really a good raw processor available at this time, either. I’m trying Adobe Lightroom because it claims support for this camera but the conversions are bad. The color is smeared and icky. Maybe Adobe can get it right eventually, but I’ve found that I really just don’t like Lightroom that much. I like what it offers but I can’t buy in to the UI. And forget Silkypix, the app that ships with the X-E1. It CAN do well but not consistently and the detail doesn’t compare to the in camera conversions. Capture1 is currently in beta to support the X-E1 and the results look good, so I’ll probably try that as well. But, really, I don’t want to switch processing applications. :sadface: 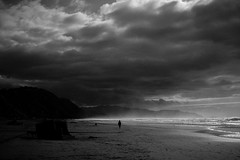 Another positive aspect is how good my back feels now that my bag is lighter. In the last year I’ve moved from a heavy bag that included a 15″ MacBook Pro and a Canon 7D to a 13″ MacBook Air and an X-E1. Even if I carry both lenses with me my bag is still about 6-10 pounds lighter depending on what lens I used on the 7D. It feels like 20. Its hard to believe that I carry so much power in such small packages. I rarely have the X-E1 on a strap because its light enough that I don’t want it and feel that it really just gets in the way.

In case you have a 2008-ish vintage Subaru Impreza WRX the X-E1 fits perfectly face down in the center console cup holder. Subaru ergonomics FTW.

Though I used the word regret earlier I used the word very lightly. There’s no buyers remorse. It was expensive but I don’t care. I’ve thought for a long time that I wanted a more simple camera with more traditional controls and it turns out that I was right. It wasn’t just a longing to get back what I enjoyed using so much when I first got going with photography I really did enjoy controlling aperture and shutter speed using dials.

The camera is far from perfect. The perfect camera is a white whale. This camera is a great camera. I kind of feel bad for my 7D. It hasn’t moved since I got the X-E1… 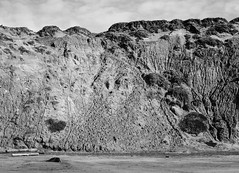 The Gippy Pages is the brain dump of Shawn Parker on the internet. Covering topics ranging from how my butt itches to software development. Your mileage may vary. Not suitable for all ages. This site contains content known by the State of California to cause cancer.

If you're the self-loathing type, you can get updates to this site via RSS.